masa, my wonderful partner is a huge geek for baseball.  and this summer when he visited the u.s. with me he wouldn’t stop singing the mcdonald’s commercial, “i’m lovin’ it!”.  i can remember driving down the street in okinawa a couple of years ago and him pointing to the navi screen and saying read this.  in my beginner japanese i proceed to sound out ma-ku-do-na-ru-do about 3 times before i realize that i’m saying mcdonald’s.  he thought it was funny.  anyway, his favorite team is the chiba lotte marines.  he, crafty boy that he is, married his love of all things geek and made this shirt.

he used really soft iron on that stretches with the t-shirt.

at the beginning of the year in japan people send each other post cards with info and updates.  i’m kind of lazy so i made these cards for my coworkers only and handed them out instead of sending them.  not very japanese but oh well. 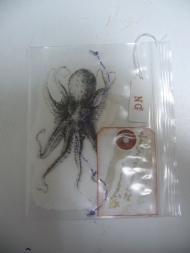 where i come from, people make stuff. they make bunkbeds, prickly pear pickers, christmas angels and tree houses. they dye t-shirts, sew skirts, make barbie furniture and install their own rugs. they bake bread, make soy milk cream puffs, grow their own tomatoes, pickle their own eggplant and that’s just the beginning. when i grew up i was lucky to fall in with a political, crazy crafty bunch of kids who silk screened, cut stencils, organized conferences, built a youth center and started the radical cheerleading movement among other things.

2.5 years ago, at 26, i left my life as a library worker and artist in south florida and moved to japan. an unprepared english teacher dropped in the no man’s land of kanagawa (about 30 minutes by train from tokyo). i discovered combini bentos, hyaku yen shops and muji. harajuku streets lined with too small, made in china, flammable clothing, and uniqlo. plastic drawers and no space, the occasional second hand shop that is tragically 90’s and exorbitantly priced. it was consumer culture shock.

japan is many awesome things, art, culture, history, cuisine, but for me, tokyo is not d.i.y..

this blog is about finding d.i.y. in tokyo and recording it.